For a snare section, the ability to play in perfect unison with each other is the toughest goal to achieve. Pipe band snare drums are notoriously unforgiving due to their extreme volume level making every tiny mistake or rough patch audible to even the most casual listener, let alone a judge. The words "rough bits" have appeared on thousands of score sheets over the years. Rough playing is the easiest thing for a judge to hear but it is by FAR the hardest thing for a drum corps to achieve. In fact, it can take several years of planning, effective score writing and endless hours of repetition to solve the problem. Today we'll focus on the third of these three elements--repetition.

Identifying problem areas in your drum scores is the first step--what does your snare corps ALWAYS fail to execute? Once you have identified a problem, design a work sheet that isolates that problem. Finally, use the worksheet to drill the skill until you achieve the unison you're looking for.

In our drum corps, one of our most inconsistent rudiments is the open six stroke roll. When listening to most grade one bands, you will hear this movement played many times. It is a rudiment that creates a ton of swing in a corps and is a nice replacement for a ten stroke roll when composing. It works just as well in a march, strathspey, reel, round reel or jig and is a musical addition to any drum score. However, it is tremendously difficult to execute! The most difficult thing to wrap your head around with the open six is that the two doubles in the middle of the rudiment should be played with equal value, regardless of the style in which they're performed. In a typical 2/4 march, it is tempting to want to delay the first double of the open six to achieve the correct swing feel but this will rush the rudiment and ruin the momentum it creates. Instead, the swing feel is achieved by playing the last note of the open six slightly sooner than is written (a tiny bit closer to the preceding double). The combination of uniform doubles and the final note played slightly sooner than written gives the open six a very musical swing and snap that propels the music forward.

In two MSRs and a medley, our drum corps only plays a total of three open six stroke rolls. Sometimes I think it would be easier just to eliminate them and replace them with something we can already play. However, it is my opinion that a drum corps in our grade should be able to execute the open six with facility and finesse. Now that the open six is staying, it's time to drill the skill!

For the first four lines of the exercise, the open six is moved around the bar to the four locations where it's commonly found--first on the beats and then on the offbeats. When creating a worksheet it is important to remember to include as much "hand to hand" practice as possible--even if your drum corps only plays the movement on one hand in their drum scores. 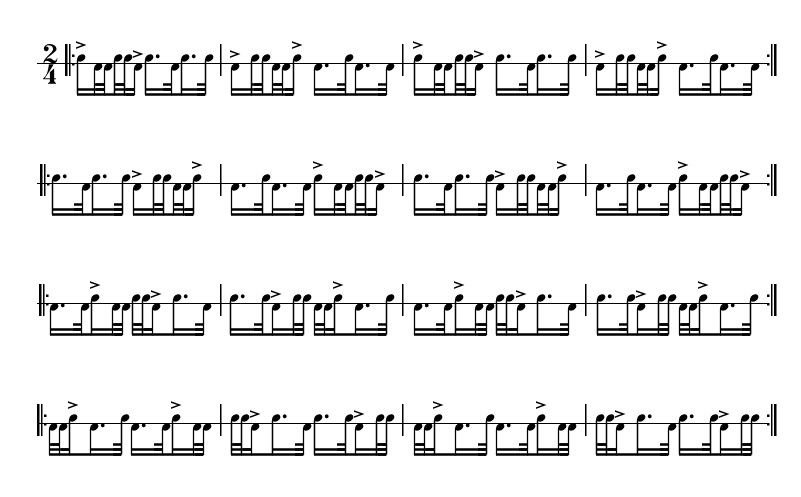 The next four lines involve putting the open six in different musical contexts. It is amazing how much harder it is to execute the open six properly when it is immediately preceded by a five stroke roll.

Finally, the open six is combined with swiss fives and single strokes for more contextual variation:

The exercises detailed above (as well as additional exercises for open sixes in the Jig style) are available as a PDF file for members in the "Subscribers" section of the site. For anyone currently using DrumWriter's cloud based music notation software, I can arrange to share these files with you so that you may alter them to suit your own needs. Send me an email if you're interested. Next week in part two of "Drill the Skill": The dreaded ratamacue!! Until then, happy drumming!